How is seaweed produced?

Seaweed production starts with the seedlings. Many concepts used in seaweed cultivation are borrowed and adapted from agriculture and horticulture. Instead of seeds we have spores, but they are often referred to as "seed", and is collected from fertile specimens in the wild. It's possible to keep mother plants in tanks on land, and induce them to produce spores when needed, just like with plants. The first time, however, there's no other way than to go out and find good stock to collect spores from.

Lofoten Blue Harvest has two suppliers of spores, Hortimare in the Netherlands, and Eukaryo at Sandhornoya south of Bodoe (in Norway). The spores from Hortimare are seeded directly on the rope at our land base here in Lofoten. We use a special double braided (braid on braid) 12-strand rope, with 50% polyester and a very loose braid. This rope is like a sponge in that it can hold a lot of water. This is a very important feature, and the seeding method depends on the rope's ability to absorb a lot of water quickly. The spores are mixed in a tub of seawater and a special glue, the ropes are then submerged in the tub, one by one.

The rope quickly absorbs the mixture of seawater, seed and glue, and we then run the rope through a pressing tool, which is basically just two rollers that press excess mixture out of the rope. The glue keeps the seed inside the rope for a while after it has been deployed at sea, and gives the spores time to attach themselves to fibers. In contrast, the Eukaryo spores are delivered pre-seeded on the ropes. The ropes are only 6 mm, which is about as small a diameter as you can get with direct seeding. They're much thinner than the ropes we use with Hortimare's seed, which are 17-23 mm (though 12 mm would be sufficient). Eukaryo spores are sprayed on the ropes in the lab, and then kept under artificial light in special containers with circulating filtered seawater. This gives the spores time to attach to the rope without the use of glue, but it's expensive and time consuming. Handling is much easier though, a shipment of 5 or 6 km can easily fit in a compact van. The ropes are shipped in styrofoam containers each with 600 meters of rope, ready to be deployed directly. In the mean time it is extremely important that the ropes aren't allowed to dry out or be exposed to frost. 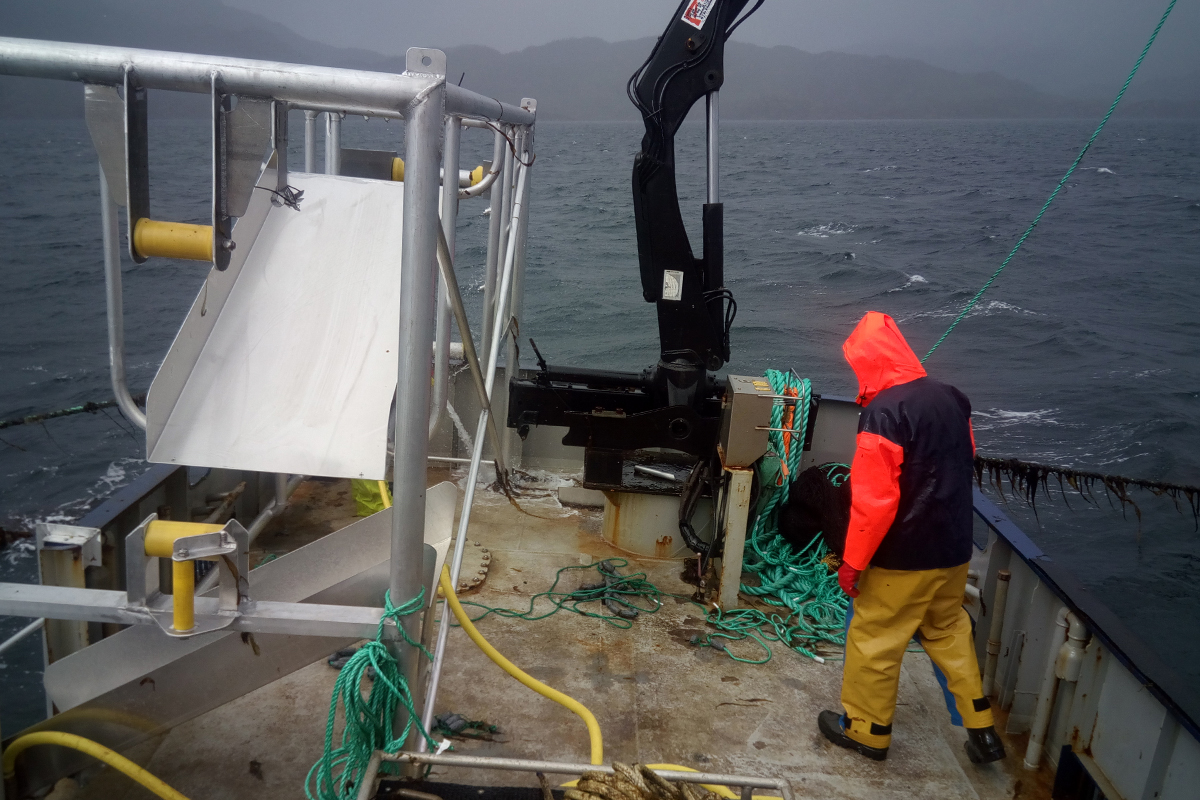 Positioning the boat on the frame before harvesting 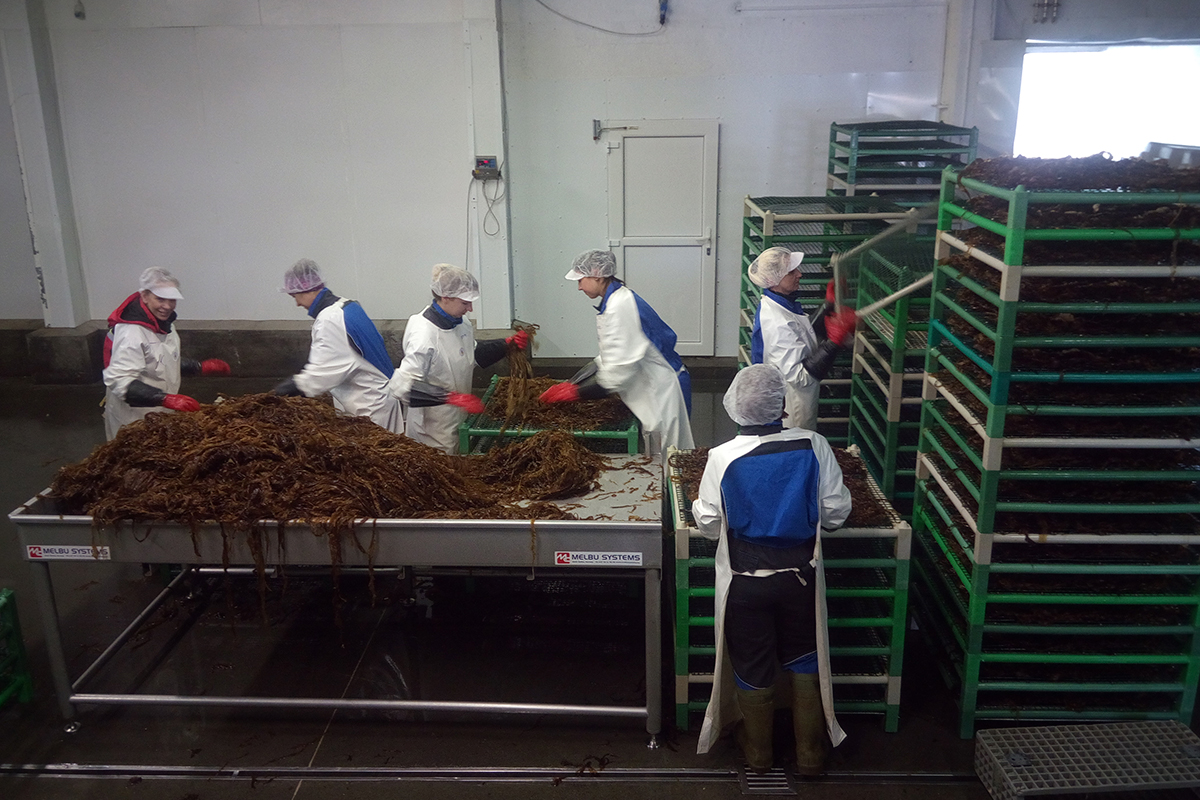 The seaweed farm is a very basic construction, it's just a floating frame, 75x75 meters. The seaweed ropes are placed in parallel across the frame in 3 meter intervals. The mooring system is simple as well, and very similar to the cage mooring systems used in fish farming. The frame is placed as close to the surface as possible and tensioned with a 2.5 ton windlass. This is considered a low tension, but we do it so that we can get to the frame with a boat hook and lift it up by hand from a small motorboat. This is necessary both for deployment, maintenance and harvesting. With only 2.5 tons of tension on the frame it's important to keep a close eye on it and maintain tension throughout the season, especially if the ropes are new. They have a tendency to slacken over time, and with strong currents pulling the frame in every direction, the effect is even more pronounced. If the frame gets too deformed the seaweed ropes will come in contact with each other, which will quickly lead to rope tangling and loss of crop yield. The seaweed ropes should be as close to the surface as possible, at least at the start of the season, to get as much of what little sunlight there is as possible. The current helps push the ropes up, but usually we attach one or two floats per rope to keep them relatively high in the water, even when there is no current.

Experts in the field will tell you that it is crucial that ropes be kept as close to the surface as possible, but in our experience, here in Lofoten seaweed seems to prefer relatively deep water. It's almost impossible to find good Sugar Kelp less than 15 meters deep, and most of it is at 20 meters or deeper. Winged Kelp seems to be doing better and will grow in shallow water 5 meters deep, or even less, as long as the conditions are rough and the currents strong. These factors correlate because when the tide goes in or out, the current is much stronger where the water is shallow, and that's often where you'll find Winged Kelp. The rough conditons are made even worse with the radical change in temperature and light throughout the season. At 69 degress north Lofoten is north of the arctic circle, we have very little sun in the winter, and for a whole month it stays below the horizon. During summer the sun is up 24 hours a day, never setting for 6 weeks. Too little is known about the parameters for optimal growth, but given how the environment changes so much we think that we need to keep the ropes deeper the further into the season we get. For the 2018/2019 season we've set a number of vertical trial ropes so that we can monitor growth at different depths throughout the season.

Ropes are deployed from October through January, which is a very large window of time, but we are continuously conducting trials, varying both location and depth, using both species of kelp to find optimal seeding and deployment times. The seedlings are safe and sound, nestled in the rope fibers all through winter, but there is virtually no growth during this time. Growth doesn't start until the sun returns in January, but it's impossible to see anything with the naked eye until late February or early March. Once it gets going, however, it quickly gains momentum and becomes explosive during spring. In only 3 months the seaweed goes from being invisible to 4-6 feet long.

Preferably the seaweed would stay at sea for as long as possible, but we have to start harvesting early enough to get the entire crop harvested, transported and processed before summer. Sugar Kelp can stay longer at sea than Winged Kelp, which becomes fertile around September, but the blades starts transforming already in June, so we have to get it up before that. Sugar Kelp isn't fertile until winter, but we still have to be done harvesting by the end of June when bryozoa starts to show up. Bryozoa are small animals that establish colonies on the seaweed and during summer will completely cover the blades. This is a seasonal event, and it marks the definitive end of the season. Bryozoa usually shows up in late June, but it can vary from season to season.

When the ropes are harvested we use the windlass to pull the ropes in from the back of the boat through a custom built harvesting rig. The first step of this process is rinsing, after that the seaweed is cut from the rope and falls into a chute. The chute leads down and out through the side of the boat into a frame with a net attached. We can also lead the chute onto the deck and into a fish tub or crate. During the main harvesting period we use two boats, one with the harvesting rig that does the actual harvesting, and the other is a fishing boat with a large hold. The hold is filled with seaweed nets until full, and then flooded with seawater. The seaweed is then transported to land where the nets are emptied into crates with sealable lids and then put in cold storage until the next morning. The next step is drying or freezing. 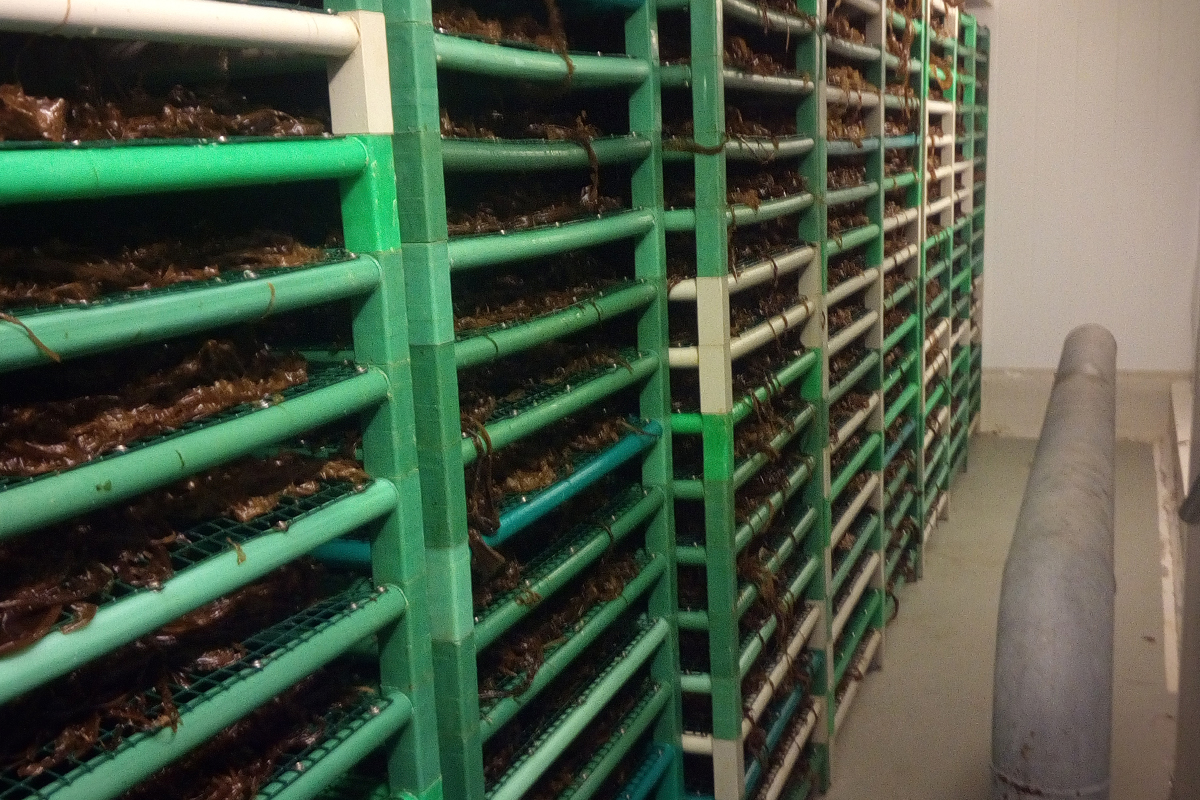 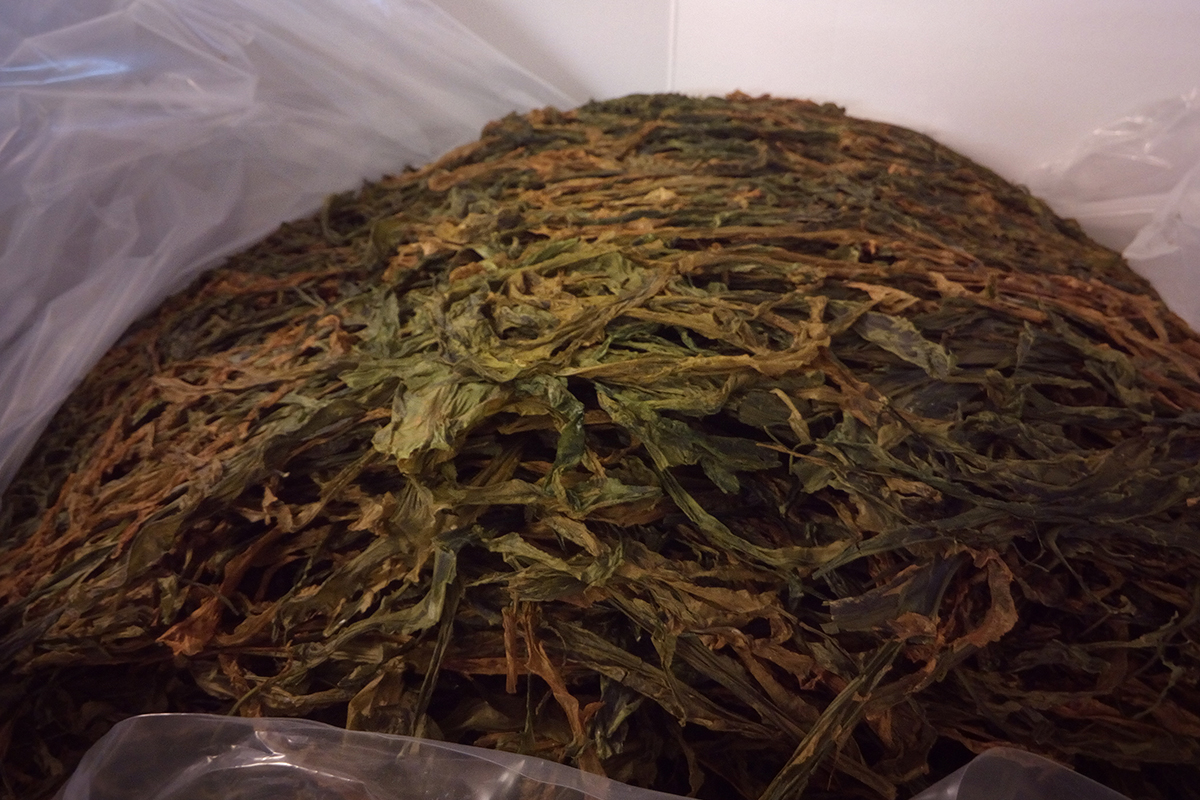 The drying process starts by spreading the seaweed out on a table and then laying it on stackable mesh frames. The seaweed is checked for foreign material as part of a quality control measure, before the racks of mesh frames are placed in the drying chamber. Drying is a huge subject, and there are a number of different ways to achieve it through different technlogies, but we only have experience with this one method. It works by circulating air using powerful fans and an industrial dehumidifier, after about 30 hours everything is completely dry. It's costly but there are few better ways to do it at this point in time, and the quality is excellent. After drying the seaweed is removed from the mesh frames and crushed into pieces of 5-10 cm, and sealed in large airtight bags. Once a bag has been sealed the seaweed is ready for temporary storage, or it can be sold as a bulk product. The crushed seaweed is the starting point for all of our dried seaweed products. Dried seaweed has a very long shelf life, but our goal is to sell the entire crop before next season's harvest comes in.

Some of the seaweed that is brought ashore at the drying facility in Svolvaer is tranported to our facility in Kabelvåg, about 10 minutes down the road. There the seaweed is vacuum packaged in 2 kg packages and flash frozen. We can freeze around 2-2.5 tons of seaweed a day, but the frozen product is less practical and is more expensive to store and transport. However, if one wants fresh seaweed, this is the closest you can get except for going out to sea and getting it yourself. Quality does suffer a little, but frozen seaweed is surprisingly close to fresh seaweed once it's been thawed. Freezing might also work as a temporary storage if the capacity of the drying chamber isn't large enough to process the entire crop during harvesting. The seaweed can be thawed out and dried at a later time when the pressure is off, which provides much greater flexibility in production, albeit at a higher cost.

Seaweed production is still very much in it's infancy, but the first steps have been taken, and we're starting to see the shape of a new industry. In the few years since we started in 2015 we've increased both production and efficiency. Seaweed prices are gradually coming down while at the same time quality is improving, which are good signs that we're on the right path. The future of seaweed cultivation looks bright, and it should have no problems finding it's place among the rest of the excellent seafood exports from Norway.